Like many of you, I read more books in 2020 than any year of my life. Whisked from work and put on disability back in March, I had the time to do it, propelled by a panic that I didn’t know if I’d ever get this much free time again. So, I tried to survive this year by not wasting a single moment — despite the occasional dizzy spells when realizing there was a thousands of people dying out there or countless cities on fire outside my window (not to mention when my own rural town almost burned in August), which would sometime whisk the whole morning, afternoon, or night from me. At any rate, there was more time to pay more attention to what was out there, literarily. Add that with being recruited to contribute occasionally for EconoClash and write monthly Lit Reactor, I got some additional opportunities to not just reflect deeper into what would become my favorite books of the year but hang out in the minds of those authors for some even dizzier spells. Here’s my top ten in the order I read them. 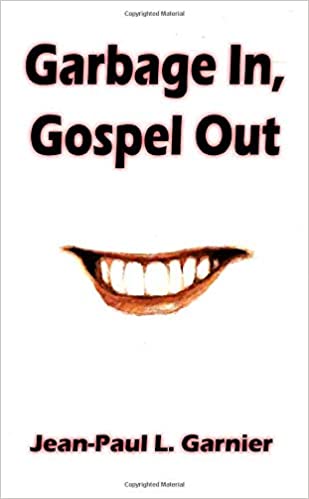 Garbage In, Gospel Out by Jean-Paul Garnier (Space Cowboy Books)
I read this experimental sci-fi novella three times — it was so confounding and shape-shifting that it seemed like a new book at every turn. A dystopian commentary on our incongruent American corporate culture, this quick, entertaining read sits between Ballard/Orwellian themes, yet stylistically it joyfully recalled Donald Barthelme for me. Some of Garnier’s text was done by cut-up technique; other sections of more linear narrative so organically bleak, heartbreaking, and hilarious that it took up large sections of my mind when the challenging year was trying to distract me from the good shit. And this was the good shit. 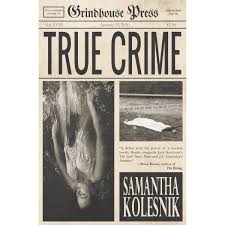 True Crime by Samantha Kolesnik (Grindhouse Press)
“You might have to do bad things sometimes, but sometimes you have to do bad to get good.”
There’s been a recent approach in horror – a long overdue angle that puts the cycle of abuse and the lifelong radiation of trauma under the microscope, exposing our haunted Americana as the homegrown nightmare that may ever end. However, any writer/director that takes this slippery path, even with the best intentions, will have to contend with Kolesnik’s True Crime from here on out. It’s a shocking story, yes… but it’s so much more than that. For all the fatal bloodshed, righteous or otherwise, that Suzy and Lim unleash on our cruel, hypocritical and very familiar world, I left the book with a renewed respect for human life — I’ve never had a horror story stir that feeling in me. Part of me wants to call the novel “empathic,” but I’m not sure if that’s even appropriate given the death grip Kolesnik had on my throat for its packed 143 pages. 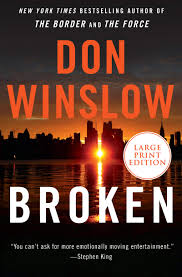 Broken by Don Winslow (Morrow/Harper Collins)
It’s superfluous to discuss how great Winslow is, but any year he’s got a new book out is a year I’m gonna discuss it; despite any indie-guilt of boosting the highest profile crime-fiction writer we have today. But Winslow has retained absolute integrity through the years, keeping one leg firmly in the underdog’s shadow that as long as he’s been at it, he’s also still increasingly relevant. I had plans to shake his hand at The Grove for the Los Angeles stop of his Broken victory lap, but by April that and everything else had been cancelled. In terms of format, this book is a first for Winslow — a novel length collection of six novellas that serve as a calling card for his legacy, revisiting characters from his past books you thought you’d never see again. And if there’s any versatile, well-researched crime-fiction writer that can weave a story about a fucking gorilla at the San Diego Zoo who steals a cop’s gun and goes on a shooting spree and make it work, its Winslow. 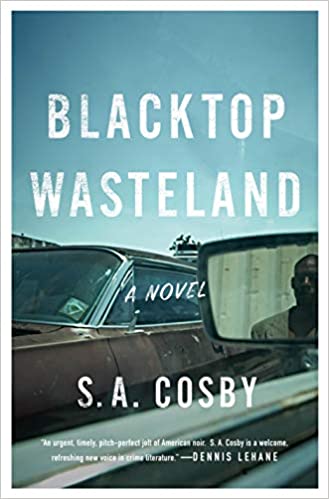 Blacktop Wasteland by S.A. Cosby (Flatiron)
This is the fastest book of the year, no doubt — and I’m not just referring to Shawn’s breakneck ascent into a higher author tier. This speedometer-busting rural noir is about cars and how no one can drive ’em as fast as the book’s conflicted protagonist. It may be a boast to some, but for Bug Montage, it’s a burden. It’s inspiring how Cosby took the “one last job and I’m out” trope and redefined it, through the scent of magnolia, axel grease, and precarious family values threatening to vaporize. The dialogue here really glares off the hood — when black Southern vernacular knife-fights with ex-con hillbilly bombast, it’s explosive yet intrinsic to one another. Still has the best last line of any book I’ve read in recent memory, but I’ll be damned if I spill it here. 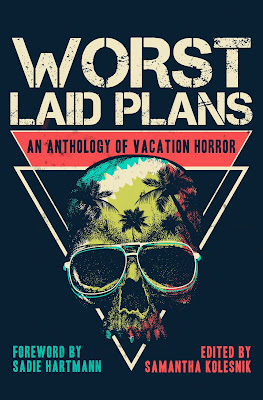 Worst Laid Plans: An Anthology of Vacation Horror (Grindhouse Press)
I read a lot of anthologies this year, but this one was pure perfection — a really difficult task when undertaking a collection of various authors. This actually contained one of my favorite short stories I’ve ever read — “Summers With Annie” by Greg Sisco, who you’ll be hearing a lot more about soon. See my EconoClash review from last summer here and get comfy cause it’s as long as our getaways are short. 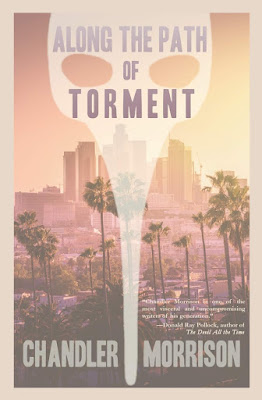 Along the Path of Torment by Chandler Morrison (Atlatl Press)
I was graced with an early ARC of this depraved gem after being seduced by both its cover art and provocative synopsis, which read something like Lolita Does Hollywood Whose Handler Tests Her Drugs To Make Sure They Are Poison. What followed was unlike anything I had read before, such a rare and dangerous offering that I found myself shutting my eyes, skipping over some passages because they were so challenging to my well-being — my pre-existing checkered constitution I always assumed couldn’t be shaken. But AtPoT reserves the right to test the reader’s limits in order to put you right there with Ty, the unique protagonist who you have no choice but to side with if you’re gonna make it out of this book with your shards of morality intact. I was so affected by the book that I tracked down Chandler out of pure morbid curiosity — the conversation turned into my first piece for Lit Reactor here. 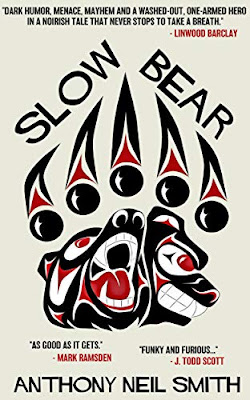 Slow Bear by Anthony Neil Smith (Fahrenheit Press)
I’m kicking myself for being fifteen years late for my first introduction to the lengthy career of Anthony Neil Smith. You’re in the shoes of a one-armed Native American ex-cop hard-knocker named Slow Bear as a slow-burning midwestern noir unfolds, then disappears anti-heroically into the horizon. Since he’s penning a follow-up as I write this, catch yourself up by diving into my essay (Smith gleefully called it a “dissertation”) in EconoClash Review from last October here. 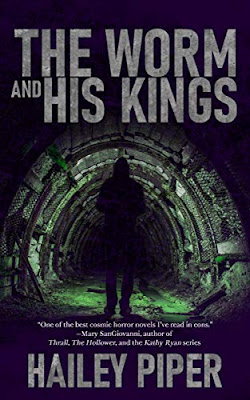 The Worm and His Kings by Hailey Piper (Off Limits Press)
Hailey Piper’s latest novella takes cosmic horror to subterranean levels of nightmarish multitude. An oppressive worm cult occupies the deceptive tunnel circuitry beneath NYC, relying on their Skeksi-esque henchmen to abduct the vulnerable and curious in order to play out their deadly celestial drama. Piper was another author I had the pleasure of brain-picking for Lit Reactor — her take on defining “fear” was a highlight for me here. 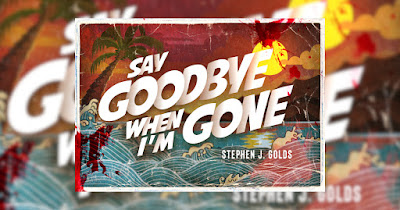 Say Goodbye When I’m Gone by Stephen J. Golds (Red Dog Press)
Golds was virtually unknown last year at this time, but through one of the most prolific avalanches of stellar work in 2020 — from flash, short-stories, poetry and even non-fiction — its culminated into his ambitious debut novel. You could say SGWIG mirrors what James Ellroy has done in his epic trilogies — extrapolating on historical events while fleshing out minutia in dirty deeds from peripheral characters. But Golds voice is so fresh, his view so wide-eyed that his focus is clearly on feeling rather than Ellroy’s curmudgeony reporting from the microfilm void. With this, Golds turns up the volume on the heartbreak as well as the violence, and it’s impossible not to get swept up in the collateral damage of both. 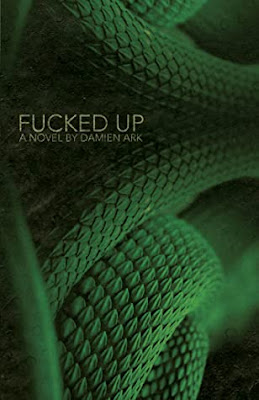 Fucked Up by Damien Ark (ExPat Press)
I feel like Kolesnik’s True Crime and Morrison’s Along the Path of Torment incrementally prepared me for the heart-vomiting, cannot unsee/cannot unthink/cannot undo, judgement-annihilating 858-page monolith of Fucked Up. Damien Ark is a young, deceptively nihilistic queer transgressive author and this is his everything and the kitchen sink debut that goes worlds beyond audacity. This is the new barometer of what you can and can’t handle. Maybe I’m only 200 pages into it, maybe my mind already hasn’t been this altered by a piece of literature since Bataille, and maybe I chose to shoehorn it in here because I stand by ExPat Press for having the bravery and vision to publish this — but definitely, there is nothing like it out there right now. Maybe ever. You’re going to hear a lot of what sounds like hyperbole like this when readers describe Fucked Up but rest assured — or never sleep again — it backs up every exclamation. Some constellations are forming in my mind to write a sprawling essay on Fucked Up to illustrate its ripple effect in depth, but until then, I triple dog dare you.
ECR is proud to host this top ten list by Gabriel Hart a definite quality cheap thrill.
Book Reviews Econoclash Review Gabriel Hart
Share. Twitter Facebook Pinterest LinkedIn Tumblr Email