Dear Thrill Seekers, this battle is not for the faint of heart. In one corner we have a mid century tome first published in France, that some readers consider the greatest book in the English Language. In the other corner, we have a scrappy milkshake of stripped down minimalism bringing all the boys to the yard. Both tell stories of criminal perverts and child abuse. One of them is a charmingly verbose read, and the other offers the seductive lyricism of a bathroom stall wall. Again, Thrill Seekers this is what happens when English Teachers break bad. 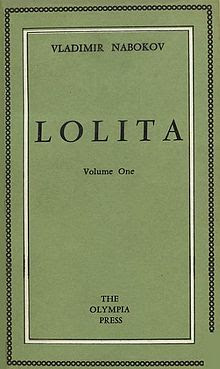 Nutting’s TAMPA has used its similarities to Nabokov’s LOLITA as a marketing tool. Which had me a little leery. They do share a common structure and pathology with their respective Main Characters:

Celeste Price, a 26 year old trophy wife of the inexplicably wealthy beat cop, Ford. Celeste has recently graduated from college with a degree in education and landed a job teaching middle school English for the sole purpose of seducing fourteen year old boys.

The books share common bones in their plot lines and story beats, especially in regards to the info dumps at the beginning:

Humbert Humbert: Has always kept his urges somewhat contained as he explains his obsession early on with the “Nymphette” female. (A fancy word for a much too young girl, seriously like WTF) How when he was a younger man he fell in love one fleeting summer with Annabel Leigh. (A knowing reference to the poetry of Edgar Allen Poe) He comes across witty and charming and always on the lookout for ways to use discretion to fulfill his needs.

Celeste Price: Married Ford for his money. However, she too keeps her true desires under wraps from her spouse. During her student teaching days, she attempted to seduce a good Christian boy, who refuses and foreshadows the rest by calling her a demon witch or something.

Both characters explain their crime plans in vivid detail:

Humbert Humbert: Marries Charlotte to gain access to Dolores. A choice he soon regrets, as he begins to confess to his diary about his distaste for his wife and his desires for his step daughter. Charlotte discovers the diary, confronts her husband, grows understandably upset, and runs outside to mail letters to Dolores of her Step father’s intentions and is ironically hit by a car and killed. HH takes this opportunity to collect the object of his obsession from the summer camp and they embark on a cross country trek where HH repeatedly rapes the girl.

Both novels contain awkward set-ups made by the predator:

Humbert Humbert: Takes Dolores to a fancy hotel and puts a Bill Cosby in her ice cream, because he cant stand the potential guilt of raping her while awake. However, she keeps going in and out of sleep and HH can’t bring himself to do the deed. She then tells him the next morning that she lost her virginity the summer before at camp. HH retaliates by telling Dolores her mother is dead.

Fun And Games…if you can call it that…that darn Save the Cat!

Humbert Humbert and Dolores begin traveling across the country lodging in shady motels. HH in fear that she is losing interests does what a lot of men do, buys her gifts…lots of them, in exchange for her affections. HH does all of this while never losing his charming voice despite the brutal acts committed. His obsession with her rivals his possessiveness. Like a lot of abusers, it is a matter of manipulation and control which leads to the ticking clock.

BAD GUYS CLOSE IN: Okay. Okay, so when the MC’s are the bad guys the antagonist must be worse monsters.

Claire Quilty: A middle aged playwright who follows HH and his ward from their activity at the hotel across the country returning to the New England country side. He too is a pervert and calls HH on the subject early in the play. He will seduce Dolores in due time and run away with her at the end of Act Two.

Buck Patrick: A pig-slob of a human being and the father of Jack. When he arrives early one day from work and finds a teacher in his house, he waste no time in pitching woo at her. Jack convinces Celeste that she should string his father along, a ruse that will allow Celeste to have a key to the house so that Jack and her can continue their affair.

Humbert Humbert kills Claire Quilty for stealing Lolita from him. Which he is arrested for and the reason for this pseudo-memoir.

Celeste Price kills Buck Patrick by not calling 9-1-1 when the man has a heart attack after again coming home early and witnesses his girlfriend and his son going at it.

THESE TWO TOMES BATTLE IT OUT TO A DRAW: No clear winner.

In the end both of these books explore the shallow depths of the sociopathic mind. The trick of Lolita is that Nabokov manipulates the audience into feeling something close to pity for HH. While Nutting does the exact opposite in her tragicomic tale. While both characters are irredeemable perverts and criminals, CP is determined to continue her depravity until death becomes her. Both characters manage to avoid their well deserved punishments, which helps the novels avoid becoming mere morality tales.

I would love to quote from both books here, but I’m not going to do it. Just take my word, that both books are engaging reads about a revolting subject. Both with unreliable narrators, one in lush erudite vernacular, and the other…well…a bold crispy minimalism that would make Chuck Palahniuk or Bret Easton Ellis swoon.

Because the subject matter is so transgressive I recommend these novels for adventurers only.