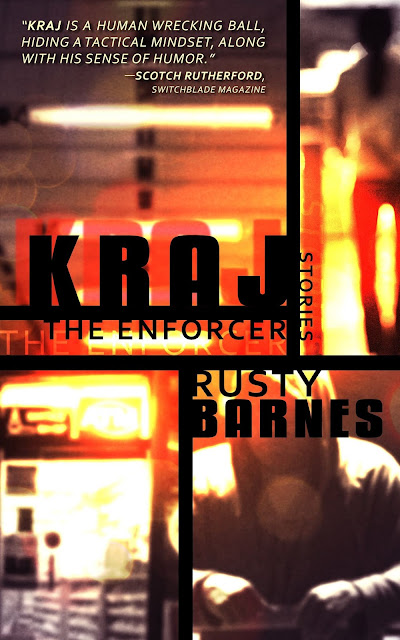 Kraj the Enforcer is a collection of fourteen stories, all featuring Kraj, a Croatian enforcer stuck in upstate New York (Elmira to be precise). In most other crime fiction, Kraj would be a side character, the muscle supporting the local crime boss. Here, he is the center piece, the character all the action revolves around.

Kraj, point of fact, instigates a great deal of that action. Whether it’s hooking up with a 7-11 worker to go on a midday crime spree in “The Mexican Pepsi DoubleCross” or hunting down his boss’ killer in “Ghost Road,” Kraj is often instigating the action instead of simply responding to it. He’s a wrecking ball of a character, lacking in grace and subtlety… but that doesn’t make him unintelligent. He’s good at reading a situation and his reactions are sharp in the clutch… but his skillset lies in hurting people, and he’s definitely no criminal mastermind.

In some ways, he’s a tragic figure. A product of a war zone (Croatia), with his family either dead or disappeared, he carries the memory of his sister with him like a keepsake and his failure to protect her drives his interactions with the other women in his life. He also fully realizes that a line of work as an enforcer and killer for the local crime boss will most likely result in a shortened lifespan, and while he occasionally entertains the lie of getting out of the life he never takes steps to move away from it. As well, the relationships he engages in are, for the most part, short-lived and volatile, though they do not end badly. Part of the humor is watching Kraj be absolutely unable to recognize that his favorite bartender, Amber, likes him for more than his ability to keep undesirables out of the club where he bounces. Outside of his love interests, however, there is practically no one that Kraj connects with.

Speaking of humor, there’s a few running touchstones through the stories connecting them. Kraj is routinely referred to as a Russian by the other characters, even though he determinedly reminds them that he is, in point of fact, a Croat. It highlights the provincialism of small town Americans who tend to lump everything outside their immediate purview into broad buckets. Some of the humor also comes from the fact that Kraj understands English much better than he otherwise pretends, leading characters (and perhaps the reader) to underestimate exactly how much he understands what’s going on.

If I have to find a complaint in the stories, it is that they are often too short, leaving off at a point where the ending could be drawn out, where the consequences of Kraj’s actions are never quite fully explored. The action, as well, tends to be one sided. Kraj has a well-earned reputation as a fighter to be feared in the unlicensed MMA fights his boss holds, to the point where it’s costing his boss money because Kraj never loses.

Like those fights, Kraj reliably comes out on top of every physical confrontation he gets into and rarely is the outcome ever in question. Sure he suffers the inevitable cuts and bruises, but rarely do they come across as life threatening (okay, okay, yes he needs to get immediate medical care due to snake bites in one instance, and there’s a question of him bleeding out in another… but given that they aren’t the last Kraj stories in the collection, he obviously survives.

Overall, I found the prose spare and cut down, not quite to Hemingway levels, to be sure, but it fit the raw stories well. The stories themselves are quick and sharp, easily devoured if all you have is a few spare minutes.

If you are a fan of the darker side of crime and noir, you’d be remiss not to pick up this collection though I’d hazard a guess that if you’ve hung around the indie crime mag scene for any length of time you’ve probably stumbled across these stories at some point in time.

You can pick up your copy here.

MATTHEW X. GOMEZ maintains his web presence at mxgomez.wordpress.com as well as on twitter @mxgomez78. In addition to writing, he is one of the two conspirators running BROADSWORDS & BLASTERS, a new pulp magazine that debuted in 2017. Other work of his has appeared in PULP MODERN, STORYHACK, SWITCHBLADE, and in the anthologies MIDNIGHT ABYSS and ALTERED STATES II.