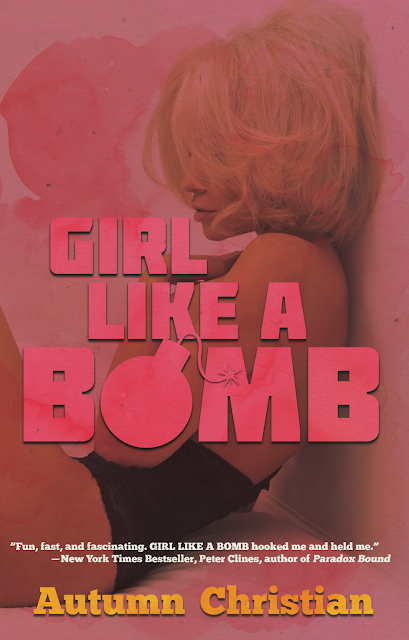 Girl Like A Bomb by Autumn Christian, published by Clash Books, 2019. 272 pages. Not all superheroes wear capes and tights. Some wear badges, or scrubs, or high-heels and sparkle glitter. Some have x-ray vision. Some can leap over tall buildings…yada-yada-yada. In this modern fantasy, our heroine’s power is…well…a little more libidinous. But hey, once she’s done…um saving you. Your life will never be the same. Fun, fast-paced, and unforgettable, this sexy take on heroism revs up a wild chain reaction that burns hotter than napalm. Take cover Thrill Seekers! This book explodes like Mentos in Diet Coke and the fallout’s gonna get messy!
No matter who you are, there’s always a first time. It’s either remembered fondly or as an awkward mistake. An experience one must endure to be welcomed into adulthood. Mine occurred rather accidentally in a cinema. I remember being very excited, surrounded by strangers. A scantily clad woman approached me with a wicked grin and asked, “Are you a virgin?”
My immediate response, “No. Of course not.”
She saw through this lie as easily as I saw through her fishnets. Her eyes twinkled and she clucked her tongue. With a bright red lipstick in her hand she pulled me close. “Relax it doesn’t hurt. You might even like it.”
Her tongue poked from the corner of her mouth as she went to work, chuckling with satisfaction.
I’m not gonna lie, the entire experience felt odd. Especially with everyone looking and laughing. My girlfriend standing next to me yelling for this woman to do us both. I was more than a little embarrassed. For a brief second I wondered if it would ever wash off my face. This was definitely different from being at home on the couch lost in exuberant ecstasy, shouting, “Damn it Janet!” Here I was, a rube, come to visit the big city and now I’d been officially initiated into the midnight world of Rocky Horror Picture Show. The two red “V’s” smudged on my cheeks let everyone know that I’d never be the same. Watching RHPS at midnight with a sold out audience is a similar experience to reading Girl Like A Bomb. They’re both bizarrely dangerous, highly graphic, and sexy fun.
At it’s heart this book is about the confidence in liberation. The magic it spreads across the page sees countless unhappy people suddenly realizing their full potential. As well as being a remedy for multiple forms of toxic masculinity. The book believes there’s a better way forward but it’s gonna get nasty before it glows for everyone. Don’t dream it, be it.
Like all superheroes, there’s a compelling origin story. The book begins as an interesting riff on coming-of-age motifs. A young woman discovers her unique talents and shares them with the microcosm of her small town. And just like every young woman stuck in the middle of nowhere who enjoys the thrill of getting it on, a reputation develops. The main character’s exploration of intimacy soon leads to the dangers inherent in sexual abuse. If only her talent had been singing, things might’ve turned out differently. Being a big fish in a small pond, the heroine soon sets out to find her place in the world and make it better.
Like every American pop-up celebrity before her, as her following grows the challenges mount one after the other. From the endless picture requests to the inability to experience real relationships. The heart becomes a lonely hunter, but the mission remains the same. We feel the MC’s isolation and dissatisfaction with the ubiquitousness of her own brand. And of course there’s lot’s of sex along the way.
What could easily turn into a sleazy treatise on kinky fornication never submerges completely into the personal lubricant, but deftly glides over the surface with just enough friction to keep you involved. The story does enjoy wallowing in it’s set pieces, sure but…as any twenty-first century human being knows there’s a plethora of things that swallow your time, with most of them not being worthy of it. This isn’t one of those. No, what makes this book special is Ms. Christian’s ability to keep the pages turning. She’s constantly conjuring up just enough wrinkles in Bev’s birthday suit to make each new revelation, a new discovery of something dark and wonderful. Outside of the bizarro premise the reader gets to experience a world, few of us can imagine. One of limitless power, intrigue, and desperation. Especially in the books last third where the stakes rise and rise and keep on keeping on.
My only complaint about this book is in regards to the publishing of the ebook that I read. It seems that someone over at Clash Books hit ctrl C on the manuscript’s .doc, and ctrl V into the kindle builder software and called it a day. There are several errant page headings present in the middle of the text body. In a perfect world all books would be 90% headers and 10% content.
But other than that–the novel is a solid work of 21st century fiction and should be read by all. Ms. Christian spins this yarn with enough golden threads of the English language to keep the reader well bespoke in story.
One of my favorites is:

“The man puffed up his chest. He reminded me of a toad trying to make itself look big so a wolverine wouldn’t eat it.”

You can pick up your copy here.
Note to readers with small children: Graphic descriptions and spoilers ahead. You’ve been warned.
In Autumn Christian’s first chapter, Bev decides that her spring has awakened and she’s ready to go all the way. Of course, she doesn’t want to do it with just any boy with a normal haircut and photo of mom on the dresser. No, Bev wants what a lot of girls want…the bad boy.

“Something calling to me across the waves – through the window, after my parents had gone to sleep. Outside, wearing night time like leather, his neck lit up in oily porch floodlights. He looked good in starshine, in 2 A.M time, even with his stick and poke tattoo of an eye on his neck, his combat boots held together with duct tape.”

His name is Spider and she asks to borrow a pencil. Next thing we know, there’s sparks.
Literally.
Bev can’t believe it. Spider can’t believe it. But it’s true sports fans. The unlawful carnal knowledge releases an energy burst ten times more powerful than anything Bev has experienced flying solo.
This moment, as shocking as it is, stays with Bev for days and soon enough she must find another partner. Just to see if it’ll happen again. Spoiler alert: It does! So she finds another. Then another. And then two at one time. Each encounter has the same earth shattering pyrotechnics, leaving her partner(s) bewildered by the electric encounter. Her reputation spreads throughout the school, especially after Spider goes from being a dirty, ill-mannered, and anti-social tough to showering, finding a job, and combing his hair. He expresses nothing but gratitude to Bev for what she’d done for him. For her part, Bev doesn’t understand. How could one sexual encounter change anyone’s life, outside transmitting STD’s or of course creating a new life entirely. Which is kinda-sort’ve what happens. Blessed with a reverse curse, Bev begins to accept her budding bewitchment. If you found yourself so blessed, wouldn’t you want to frag and spread the wealth?
Do to her extra-curricular activities her grades begin dropping. One of her teachers shows this once promising student concern and asks her to stay after class for private tutoring. Bev being Bev doesn’t sense anything wrong with HIS offer. Dear thrill seekers, if you don’t get a little creeped out at this point–then you’re not paying attention. This scene is expertly written and completely anxiety inducing. The teacher wants to know if the rumors are true. When Bev refuses–things go off the rails. Bev survives the ordeal, but she’s the only one. Fearing murder charges as well as the high school rumor mill, Bev decides to skip town.
Part two finds Bev going by the name Angel. A nom de guerre that fits in well with her co-workers, who ply their trade in the dimness of strip clubs. But despite the name change Bev’s reputation follows her. We are treated to multiple scenes of desperate men and women seeking out her life altering power. Since it feels good, Bev/Angel is completely willing to help them.

The book kicks into high gear at this point. She develops a cult following that ends up going mainstream. She hires an personal assistant and a body guard and her consultation business booms. With this new found fame comes the perils of sudden stardom. The inability to develop relationships beyond the physical, hounded by dangerous clients, and of course–sexually transmitted disease. This part helps the book’s bizarrely escalating fantasy feel real as it builds to the messy climax.

“I found myself sitting on a freezing toilet, staring down at a pregnancy test. The last log in the furnace downstairs had died an hour ago and I could almost see frost forming on the walls. I never really realized how long two minutes could be, how many shades and variations of thoughts and emotions I could transition through, until that moment I sat waiting for the results to appear. I felt like I could have run from the tip of the earth into the sun in those two minutes.”

And as much as I would like to spoil more of it for you…I’m just not gonna. Just know that this reader found it well worth their time, enough so they typed up all this nonsense to support how much they enjoyed it.
Don’t let this poorly executed review deter you. Read GIRL LIKE A BOMB for yourself.
You can pick up your copy here.
Autumn Christian Book Reviews Econoclash Review
Share. Twitter Facebook Pinterest LinkedIn Tumblr Email