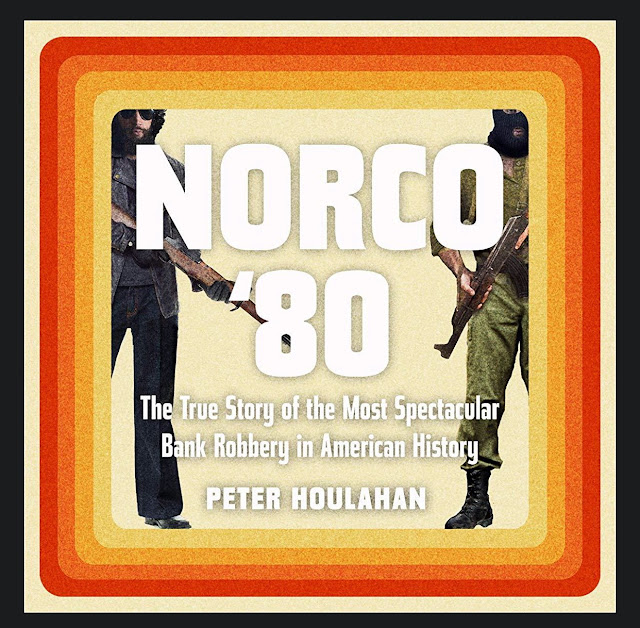 What follows is the true story of what happens when a charismatic evangelical joins a doomsday sect, loses his girlfriend, recruits a small squad of roustabouts, stoners, and one diabetic, collects an arsenal of high powered assault rifles and explosives, highjacks a van and takes a hostage, waltzes into his own bank branch, demands the tellers empty their drawers, lays down suppressive fire at everything that moves including a helicopter, takes a bullet to the upper thigh, manages an escape into the hills, fears his own death and surrenders, and inadvertently advances the militarization of America’s police forces. And thrill seekers that is literally only the gripping first half of this twisting tale of poor choices, crime history, and inappropriate conduct between a lawyer and her client. Buckle-up buttercup!

Mr. Houlahan presents a finely crafted narrative that is both heavy on detail and quickly paced. And other’s have definitely noticed as the press kit says:

I picked up my copy back in November based entirely on the cover and title. Don’t judge. Pick yours up here.

After the preliminary chapters deftly peopled the late seventies Inland Empire, Houlahan gets to work on the main event. The build up to the heist is steadier than a drum-line in a bowl game. Each moment is projected in glorious high definition. I’ve read some complaints that the prose is burdened with tedious details that bog down the flow. And to those negative Nancy’s I say, don’t worry the next James Patterson book is coming out soon, chill.

The robbing of the bank is a taut exercise in planned precision and unexpected failure. You can smell the fear of the bank employees as the guns are drawn. You can feel the cold ice water freezing the veins of all bystanders. The bad guys have two things on their side: the element of surprise and a faulty silent alarm (due to a construction error) which is sending squads of officers to a different branch five miles away. When they force open the vault they find a paltry pantry. If they’d only arrived an hour and a half earlier they would’ve cleared quite a haul, but it’s payday and the armored truck hasn’t arrived or maybe it’s gone already. They have no time to wait. They gotta go and go now. And then Murphy’s law throws the book at them.

The five crook’s escape the bank in a multi-camera set up, from several different points of view. The effect creates a cinematic slowing of time, like in Peckinpah’s The Wild Bunch. But unlike that gang of sullen antiheroes, this slew of misfit brigands never run out of ammunition. They immediately open fire on an unsuspecting deputy. Forty-seven bullets rip through the vehicle’s windshield, bumper, and engine block like the Leonids through the night sky. Just the first victim of their doomed getaway. After the dying officer radios for help, the GOOD GUYS arrive one by one, unaware they’d just strolled into one of the most dangerous shootouts to ever occur in the 20th century.

The escape (if you can call it that) falls apart immediately afterwards. The first casualty is the gang’s teenage driver. In a very moving passage, Houlahan describes the feeling of the boy’s approaching death after a single ball from a shotgun did more than pepper the van. He loses all feeling below the neck as his hands slide off the steering wheel. But we are allowed to know an approximation of the boy’s final thoughts. And even though the kid is in the wrong, you can’t help but empathize with someone who didn’t want to be there in the first place.

After the van slows to a stop, the remaining crew realizes the extent of their botched plan and attempt to flee on foot. Eventually hijacking a yellow truck and tearing through traffic, unloading clip after clip at every thing that moves. This sequence is quite harrowing and Houlahan does excellent work describing it in toe-curling detail–putting us in the roles of the first responders as they somehow manage to survive direct contact with this deadly brood of horribles.

The avalanche of violence and shattered glass keeps flowing until…

Cue fast forward noise. It’s no spoiler that three of the perps get arrested early the next morning. The fourth, Manny Delgado the getaway driver’s older brother, challenges the police to a game of chicken and loses. In their wake the ignoramuses left a path of destruction that injured nine innocent people and killed three. And Houlahan ensures we are with them for every stumbling chaotic step.

Like all noir stories, the most engrossing parts aren’t found in the elaborate set pieces that trigger the doom filled mousetraps. No ma’am, the heavy lifting of this book is found in how they try to free themselves from the trap that’s snapped down on their ankles. And the truth is, everything goes off the rails in a really excellent way.

The cogs of justice churn slow, but Houlahan uses it to explore the psychology of everyone involved. The second half of the book takes the genre beats of a courtroom dirge and bends them into a domestic drama. These aren’t just criminals with anti-social tendencies. They are human beings who cannot figure out a simple way to justify their actions. So, to avoid the death penalty, these morons continue to march towards outrageous disaster.

Spoiler alert starts here, scroll down to Spoiler end: As the courtroom half unfolds, the once charming and self-confident George Wayne Smith (the evangelical from the above lead in) reveals himself to be an incredibly manipulative and dangerous sociopath.

And as if on cue, in walks the femme fatale, but in this case she’s going to try and save George’s life instead of ending it for insurance money. Her motivations are as bewildering as her actions in the courtroom vestibule, and a conference room, and quite possibly his very jail cell–spending time alone with her client investigating more than the case.

She will eventually marry the defendant while he languishes in prison. We are led to believe this isn’t the first jailhouse romance she engaged in. As the verdict nears, these schmucks go all in on the “it wasn’t me…it was the one armed man!” defense, creating a sixth perpetrator from whole cloth. The jury doesn’t buy it…and neither should we.

The bad guys lose and the good guys win…sort’ve.

END SPOILERS here:  It is not lost on the reader that the most moving aspects of this novel concerns the handling of PTSD. The first responders who engaged with and eventually stopped these criminals were forever changed afterwards. And I believe that this may be the reason that the prose is so detailed and harrowing. Houlahan uses his immense talent to put you inside the bank, the getaway car, the jail, the courtroom…the um…courtroom’s side room. You almost regret enjoying the action sequence of the heist, since you know that it really happened. You know that the people in this book and the mind bending difficulties they inflicted and withstood were all real. This may be a non fiction book, but it is a full tilt boogie thrill ride with a soft spot in its heart for everyone that goes to work everyday to save lives and with the chance they may have to sacrifice their own.

Mr. Houlahan does an excellent job of detailing a world and populating it with its people, warts and all. The book reads like one of the best heist narratives I’ve read in a hot minute. A thoroughly compelling piece of true crime. I do hope that Mr. Houlahan gets the recognition he deserves.  And Norco ’80 wins the Edgar. Five stars.

This is the author’s bio from the publisher’s website:

PETER HOULAHAN holds an MFA from Sarah Lawrence College. In his career as an Emergency Medical Technician, he has contributed to a number of articles related to his profession, including the impact of PTSD on first responders. A native Southern Californian, Houlahan now lives in Fairfield County, Connecticut.
Book Reviews Econoclash Review Peter Houlahan
Share. Twitter Facebook Pinterest LinkedIn Tumblr Email