The time-travel trope, if employed well, never seems to wear thin. Several of my favorite narratives — Donnie Darko (2001), Primer (2004), Source Code (2011), and The Shining Girls (2013), to name a few — all involve time travel to some extent. “Part of the fascination of time travel concerns the stark paradoxes that threaten as soon as travel into the past is considered,” writes the theoretical physicist Paul Davies in his 2001 book How to Build a Time Machine. “Perhaps causal loops can be made self-consistent. Perhaps reality consists of multiple universes.” These thought experiments are rife with unanswered and unanswerable questions, which are the very stuff of great stories.

Time is a game

Project Almanac (2015) illustrates those paradoxes and their intrigue while still being a fairly mediocre movie, but it fails in spite of the time travel rather than because of it. 2009’s Triangle also loops time in a muddy and often confusing story. Time travel is such a huge cognitive load that it’s difficult to get right in a movie with much else going on and even harder to make feel real.

In contrast, Timecrimes (Los Cronocrímenes; 2007) capitalizes on its causal loops and suspenseful twists rather than wasting them. The film contains exactly four actors, and its action takes place over the course of about an hour and a half. In its handling of causality, Timecrimes is somewhere between Shane Carruth‘s Primer (2004) and the popular Back to the Future franchise of the 1980s, both of which feature extensive backwards time travel. Like Primer, which uses time travel as the pretext for the study of larger issues, Timecrimes evokes themes of voyeurism and ethics in addition to its time-looping structure and the subsequent questions of causality. This is Spanish director/actor Nacho Vigalondo’s first non-comedic film and his sure-handed direction makes this condensed, pressure-cooker of a temporal thriller an imminently watchable and intriguing film.

Timecrimes tells the story of Héctor (played by Karra Elejalde), a lazy middle-aged man who has, with his beloved wife Clara, moved into a freshly built house in the rolling hills. After attempting to nap and receiving a strange phone call (he calls the number back, getting a machine with an outgoing message that says, “This is a restricted terminal. Leave your message or enter your access code”), Héctor is left lounging in his backyard, peeking in on the neighboring countryside with his binoculars. As Clara heads into town to buy groceries for the evening meal, Héctor catches a glimpse of a sultry scene-in-progress. Through his binoculars, he sees a half-naked young woman posed, poised, and undressing in a clearing in the woods. Upon closer inspection, fumbling through the woods as he goes, Héctor finds her naked and asleep. He attempts to awaken the helpless young woman but is stabbed in the arm with scissors by a man in a ratty trench coat with pink bandages covering his head and face.

The event that sets the action in motion in this film is Héctor’s spotting the young woman in the woods. There’s no reason evident for his initial scoping of the landscape through his binoculars. We can only assume that he’s driven by the desire to see what surrounds his new environs. Once the young woman comes into view, his purpose changes. Héctor’s motivation shifts from the desire to see to the desire to see more. His intentions may have been pure at the onset, but upon seeing glimpses of the young woman’s naked body, Héctor becomes a voyeur. Voyeurism is the act of watching the activities of others without their knowledge, and while cinema is inherently sexual via voyeurism, Timecrimes adds actual sexual voyeurism to its plot.

Laura Mulvey sees the cinema system and its products as inherently patriarchal. Film teaches us to see as men see, to see women as men see women. Timecrimes fits Mulvey’s patriarchal schema not only by making us see just as Héctor does but also by making the naked female body the object of Héctor’s viewing. The young woman in the film, as in most films according to Mulvey, stands in patriarchal culture as signifier for the male other, bound by a symbolic order in which man can live out his fantasies and obsessions through linguistic command by imposing them on the silent image of woman still tied to her place as bearer of meaning, not maker of meaning.

Indeed, the naked young woman in the woods in Timecrimes is the pivotal signifier, sending Héctor into the maelstrom of events that make up the rest of the film.

is to listen well and choose

one course of action. “By virtue of its handling of space and time,” Bordwell writes, “classical narration makes the fabula (story) world an internally consistent construct into which narration seems to step from the outside.” In its handling of space and time, Timecrimes violates and simultaneously maintains Bordwell’s idea of the straight corridor. It violates it by looping in upon itself through the plot device of backwards time-travel. Throughout the film, there are three versions of Héctor traversing the same block of time in proximal space.

The film maintains the straight corridor by consistently showing the narrative from Héctor’s point of view as he travels back in time twice. The viewer follows Héctor through the time-traveling and the loops and thereby maintains his singular, linear path. If viewed from the scientist’s point of view, the film would appear chunked backwards, in a Memento-style “crooked corridor,” with the viewer seeing the third Héctor first, the second second, and the first last. By the end of the film, Héctor has passed through the same block of time three times and managed to emerge the singular Héctor.

“Manipulation of the mise-en-scéne,” Bordwell continues, “creates an apparently independent profilmic event, which can in turn be more or less overt, more or less ‘intrusive’ on the posited homogeneity of the story world” (p. 24). Upon first viewing, Timecrimes appears to be presenting its story in a nonlinear fashion, but this notion is a product of its time-traveling subject matter, not its narrative structure. Like Run, Lola, Run (1998), Timecrimes shows us three versions of the same block of time. It differs in that it’s showing the same block of time from Héctor’s point of view during his three trips through that block of time. In actuality, the film depicts a strictly linear path, albeit with two trips backwards through time (See Fig. 1.).

Because Héctor’s narrative path overlaps itself in time, Timecrimes violates Bordwell’s straight corridor in attempting to maintain its linearity by following Héctor’s point of view. Bordwell states, “Causality also motivates temporal principles of organization: the syuzhet [plot]represents the order, frequency, and duration of fabula [story]events in ways which bring out the salient causal relations.” Timecrimes twists up Bordwell’s straight corridor by attempting to show its multiple backwards time-traveling plot as a linear narrative.

to purify themselves with blood

who steps in filth and thinks

to bathe in sewage. 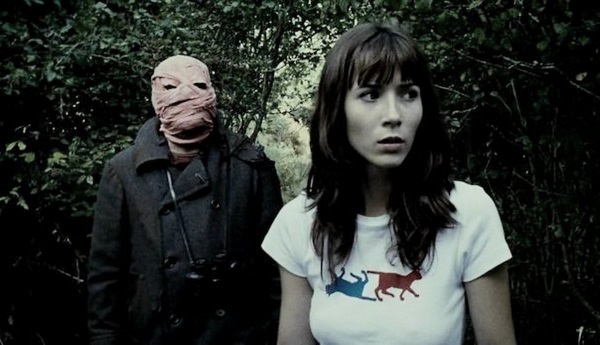 Héctor 1’s seeing the young woman in the woods sets the first part of the narrative in motion. As soon as his wife Clara is gone, he immediately sets off to investigate. His use of the binoculars is the impetus for the action of the film. The lens is the apparatus by which the plot is spurred into motion.

Héctor 2 sees himself (the scientist goes so far as to call Héctor 1 his “mirror image”), setting off the second part of the plot. As Héctor 2 watches Héctor 1 interacting with his wife Clara through the binoculars, he feels that he has been replaced and thereby castrated (Mulvey, 1986). The rest of his actions in the movie are toward one goal: getting rid of Héctor 1 by making sure he gets into the time-machine. Héctor keeps a close watch on himself—both ways—through his ever-present binoculars.

When Héctor 2 accidentally kills Clara (or so he thinks), he realizes he has to travel back again (as Héctor 3) and keep himself (Héctor 2) from killing her. All of these events stem from Héctor’s (and thereby our) voyeurism through the binocular lenses, lenses that show the world as more real than what our naked eyes see.

Just as the river where I step

is not the same, and is,

Timecrimes upholds Mulvey’s contention that film is inherently voyeuristic, and that it utilizes the male gaze to subjugate the woman’s body for the male’s fantasies. If Héctor hadn’t been combing the countryside with his binoculars, he wouldn’t have seen the naked woman in the woods (ironically being held captive by another version of himself), he wouldn’t have investigated further, and the events of the film wouldn’t have unfolded as they did. The plot preys on Héctor’s voyeurism to propel itself forward.

The film also contains Bordwell’s notion of double causal structure, with one plot line involving heterosexual romance between Héctor and Clara, and another involving Héctor’s voyeurism and subsequent time-traveling adventure. The double loop of backwards time travel twists up Bordwell’s straight corridor, that is one of a linear causal plot. Though Timecrimes is shown as linearly as possible (i.e., from the point of view of one character), its causal chaos (i.e., the fact that Héctor 1 is spying on himself, and Héctor 2 is spying on himself, etc.) makes it seem nonlinear.

The apparatus of the lens (both movie camera lens and binocular lens), which is usually assumed to be transparent, is brought to our attention throughout the film by transposing one for the other: The binocular lens shows Héctor—and thereby us—what is real.