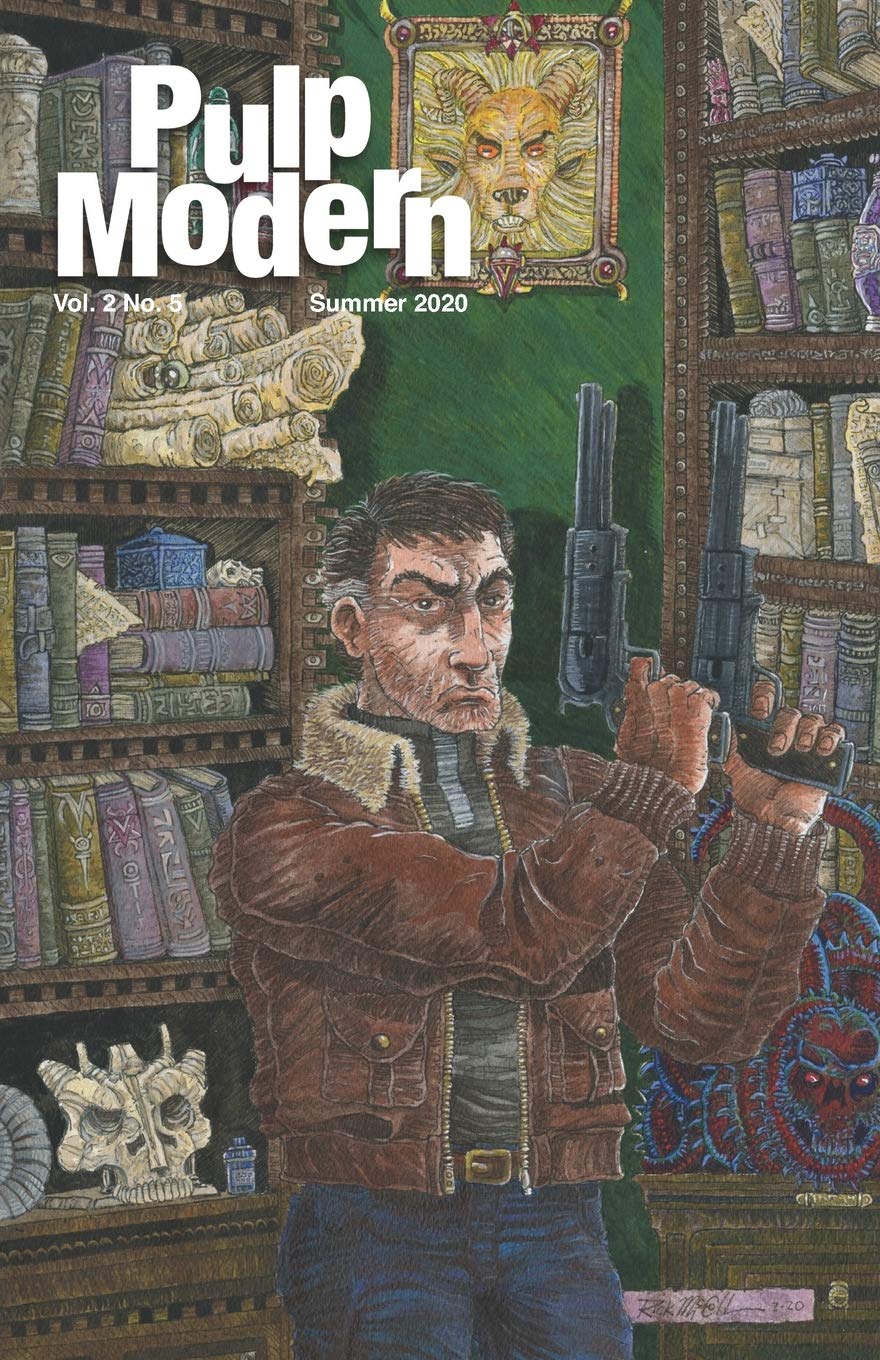 Editor Alec Cizak continues to carry the banner of the short story forth, again with a focus on crime, but also veering off into post-apocalyptic, Weird Western, science-fiction, and even the occult. It’s a grab bag of genres, to be sure, and a diverse array of talents pulled together under one masthead. If you are looking for short quick fiction, its hard to go wrong with Pulp Modern, and this issue is no exception.

Here’s what you’re in for with this issue:

“Companion” by Andrew Bourelle – a boy and his dog wander a post-apocalyptic landscape, trying to eke out survival as long as they can. An utterly bleak and remorseless piece that revels in the gory details, and one where your heart can’t help but bleed for the protagonist. I found it a bit too reminiscent of “A Boy and Hid Dog” by Harlan Ellison, but maybe it goes to show that everything old is new again.

“The Bowie Knife” by Peter W.J. Hayes – an antiques dealer and his associate get a chance at the deal of a lifetime: the opportunity to sell Jim Bowie’s legendary knife. This one surprised me a bit as two con artists swing back and forth, each trying to outdo the other, but all told through a slightly disjointed, nearly oral format story. I found the characters eminently believable and, to the credit of Hayes, I found my sympathies shifting to different characters as the story progressed.

“These Violent Delights” by Mandi Jordan – a squad of synthetic human soldiers are maybe too good at their job, and when their first mission goes off the rails, the government that created them is at odds to decide what should be done to them. Before a decision can be reached, or at least before it can be implemented, the squad escapes and attempts to disappear into the regular world. The government isn’t keen on their lab grown soldiers running free however, so it begins to hunt them down. A very “Blade Runner”/”Do Androids Dream of Electric Sheep” feel to this story, though it lacks some of the cyberpunk grit, instead moving more toward military science-fiction. I found the voice of the main character, Isis, compelling, as she tried to figure out where her loyalties were and how “human” she really was.

“Ghost Town” by “Doc” Clancy – The Rev. Holyoak is on a mission to find a lost young woman, and it takes him to Arizona. There he meets up with an esoteric lodge of occultists who aid him in hunting down a literal ghost town, a long-abandoned settlement where the undying inhabitants pledged themselves to Satan. This piece as the most “old school pulp” feel in the issue, and is an excellent example of a Weird Western.

“Burnin’ Love” by Timothy Friend – a bounty hunter goes looking for what he thinks is an easy mark- a small time arsonist who doesn’t pose that much trouble… or so he thinks. Unfortunately for the bounty hunter, the arsonist has a new girlfriend, and it’s a question as to whether he can survive the fire of their love. It’s a dirty tale of crime, and Friend does an admirable job of putting the reader right in the middle of it.

“Necessary Evils” by Serena Jayne – a woman, disgusted by her older husband, but wanting the finer things in life, devises a plan to be done with one but not the other. But her husband has been keeping secrets from her as well, but what’s a woman to do? An excellent example of how past is prologue when it comes to characters, and maybe even a bit of karma at work.

"Intercession" by Adam Furman – in a world where demons are all too real, what can one man do? Well, if he’s got a gun and a magic dagger, quite a bit. And who says you ever have to keep your word to the forces of evil? Furman takes a walk on the seedier side with this one, and as a reader I had to wonder if the main character was actually good, or just seemed that way compared to the sin surrounding him.

“The Unbroken Circle” by Victoria Weisfield presented an old-school murder mystery where a close-knit family’s secrets are threatened to be unburied, all thanks to a mysterious stranger who delivers an old family Bible… then turns up dead. I was hoping for a bit more out of this story, to be honest, as the mystery is slow to unravel and by the end of the story, most of the characters are left where they started. If you enjoy a cozy sort of mystery, this could be the story for you, but honestly wasn’t the kind of thing I was expecting to find in an issue of PM.

“How to Make a Boulevardier” by Nils Gilbertson takes a long look at a crime family and how far the intricacies of loyalty go when everyone has an agenda. I found the pacing of the story to drag a bit, not the least because the main character is more observer than agent throughout the course of the story, as it is everyone else around him that drives the story forward. To be fair, it works so far as the twisted skein of relationships is revealed to the reader at the same time the main character comes to his own conclusions, but I even found the end to be a bit of a letdown with the resolution being a simple declaration.