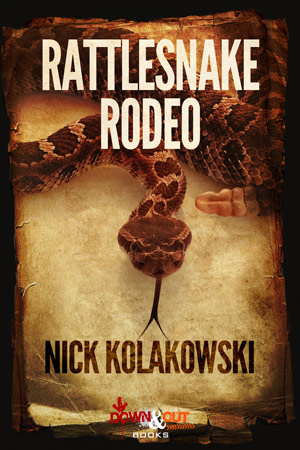 Rattlesnake Rodeo picks up right where Boise Longpig Hunting Club left off. Jake, his wife Janine, and his sister Frankie have just survived a version of the Most Dangerous Game, sponsored by one Tom Baker, where they were hunted by a selection of the 1% including politicians, CEOs, and other power players. Only now they get to deal with the fallout of having killed some very powerful people.

That fallout comes in the form of Karen Baker, Tom’s sister, who is a former prosecutor and has more than enough money to be dangerous. Thanks to keeping digital tabs on her brother, she knows that Jake and his family are responsible for her brother's death, but rather than going out for blood she uses that leverage to turn the three into her own assassins…all to kill a young boy.

What are the three to do when Karen seems to have all the cards: hired guns, crooked cops on her payroll, the justice system in her pocket, etc.

This is a novel with almost no quiet moments save near the end. Jake and his cohorts go from gun battle to gun battle with few barely time for either them or the reader to catch their breath. The novel is told exclusively from Jake’s point of view, and there is the overwhelming sense that he is barely keeping his head together. There are times when he nearly gives in to despair, accepts that the outcome is inevitable, but his most admirable qualities are his perseverance and loyalty to his family. Jake’s an Iraq War veteran, still dealing with PTSD from his tours, and the stress of combat and being hunted on top of being sleep deprived takes a noticeable toll as the book proceeds. Frankie is the career criminal of the group, running guns from the US into Mexico and comes with her own crew of misfits with such monikers as Surfer Boy and Monkey Man. Janine, meanwhile, suffers from OCD, but its striking that of the three main characters, she comes out of the other end the strongest. The characters even comment on it and joke about how they could market Near Death Therapy. At the end of the day, having armed people hunting you puts the rest of your problems into perspective. Of course, given Jake’s mental state near the end of the novel, it can also nearly break you completely.

If you were going to boil the novel to a single line it would be “The past is alive, and it’s always trying to bury you.” Because Jake and Frankie’s father busted up a drug deal that the Bakers were involved in, Tom Baker targeted them for his hunt. Because they killed Tom Baker, his sister came after them. Because Karen came after them, Frankie threatens to hunt down the next generation of Bakers. It’s this sense that there is this vicious cycle of violence that relatively ordinary people can get sucked down into even when they had nothing to do with the original cause.

The strongest aspect of the novel is the relationship and interplay of the three main characters, and Kolakowski does a fantastic job setting his action scenes. Kolakowski also does a great job depicting the Western setting of his story. It is obvious he’s spent time in similar environs, and he does an excellent job of translating that experience to the page. The setting ends up being almost as much of a character in the story, at times aiding the characters while other times providing as much of an obstacle as Karen’s hired guns.

The biggest downside is that, given the frenetic pace of the novel, it doesn’t give much space to develop the other characters beyond quick sketches. I can remember most of them based on their monikers, but with the exception of Monkey Man, most don’t get much more than that. Even Monkey Man doesn’t get much character development beyond the fact that he always wears a monkey mask and also no one except for Frankie ever hears him speak. As a result, when something bad happens to them it doesn’t have the same emotional punch as it might have otherwise. The villains are likewise given only a rough amount of detail- they have money, and power, and feel they can manipulate everyone else around them. Maybe that’s enough though. It is more than fair to say that this is a novel that puts the war into class warfare.

Final word – if you are looking for an adrenaline rush of a novel that presses the pedal all the way down, you owe it yourself to pick up Kolakowski’s latest.