By J.D. Graves - March 15, 2020
ECR reviews Cody Goodfellow's 2014 bizarro tour de force, REPO SHARK, published by Broken River Books, 300 pages.  Aloha thrill seekers! In honor of the coronavirus-global quarantine I've decided to help all of those fine people desperately desiring a vacay. We’re on island time now, so unpack your bags, apply sunscreen, and slip on your favorite orange Crocs because we’re cruising the trashiest beach this side of paradise. You won’t be smelling the helliconia or the bird of paradise or that warm island breeze here since around every corner of Cody Goodfellow’s surreal noir REPO SHARK there’s an open dumpster and some of them are on fire. But don’t worry thrill seekers, even in such a bleak tropical vacation as this, there are plenty of tourist attractions. Number one for this reader is Cody Goodfellow’s clever use of the English language. Repo Shark’s verbiage is as textured and prickly as a pineapple and overall--just as sweet. 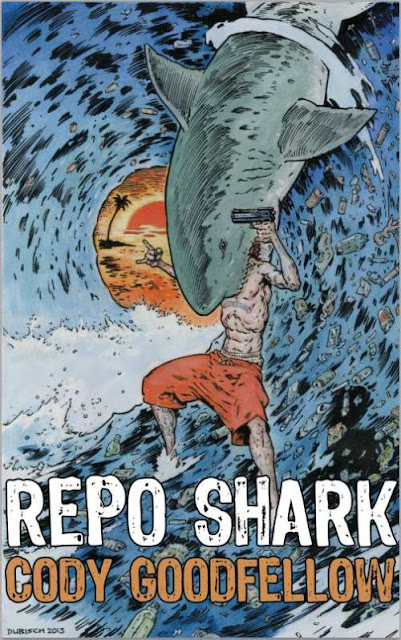 This book reads, "with a scream like vaporized rubber." Early on our hero, Zef DeGroot stops to admire his surroundings at the motel:

"The Christmas tree in the Illikoi’s lobby didn’t look decorated so much as it seemed to have lost an ornament fight. Lopsided garlands of gold tinsel made the flocked Douglas fir look like it was slowly tipping over, and the tacky tiki ornaments had been fired into it at high velocity with clear malicious intent. With a tree that nice, Zef could understand why they’d want to leave it up halfway through February."


This is the kind of buried gold your metal detector will scream about as you comb the beach.

After opening this show with a strange exchange with a inebriated hooker that draws a crowd and sees the motel room destroyed, Zef DeGroot sets out on his mission armed with a briefcase loaded with enough distractions to make Hunter S. Thompson do a jiggy dance. This self-styled repo ninja tracks down deadbeat debtors who've skipped out on payments. The target is a high end Harley-Davidson being ridden by a violent drug dealer and karaoke enthusiast, Donny Punani. With the big Punani, and almost everything else in these pages, things ain't as they appear and barely contain the darkness burbling just below the surface. To make matters worse Punani's surrounded by a gang of dangerous weirdos who can't stop--won't stop. But is our hero scared of the onslaught of dangers? Early on Zef proves his courage and his stupidity when he challenges the locals to a surf contest:

"These waves were not like the ones at the Adventuredome. It was like falling headfirst into an industrial washing machine on the rinse cycle. He rolled with it like an empty suit, seeing only bubbles and thinking only to close his mouth and try to find the surface. There was no surface, there was no bottom, there was only the wave and it would never end, because even if he escaped it, he would be in bed somewhere in his old age and awaiting death and when he closed his eyes, he would still be whirling in the grip of this fucking wave."


It soon becomes apparent that the motorcycle's just a Macguffin to rev up the chaos that's coming. Besides the language Goodfellow deploys, another highlight is the action packed set pieces. Zef must out maneuver a parade of uglies AND the kitchen sink. Including harsh assessments of the colonization of the islands:

“You don’t know history, do you? When they came out here, the missionaries, there were four hundred thousand of us, and just a couple hundred of you, but within forty years, there were only eighty thousand of us left, and the missionaries’ kids owned all the land. Wasn’t no war…just muumuus and smallpox, the white god and all his laws, and the white way of life. They came preaching sin and death and didn’t know their words out here were magic. Death magic worse than germs, worse than alcohol and Spam and Mickey D’s."


Repo Shark's action scenes are packed with energy and humor. The motorcycle chase scene springs to mind as a sweepingly cinematic touch, as Zef tries to escape the initial repossession attempt. The overall structure is tight. Goodfellow keeps the rhythm pounding as quick as island skins, leading to a pitched high climax that bursts like an angry volcano. It'll leave you panting for air with your toes in the water and rear in the sand. Also there's gross out stuff inside these pages that must be absorbed one glorious word at a time. A thoroughly engrossing read that I cannot recommend highly enough. So spend your quarantine time on something worth two or eight weeks. I read it in two days, but it could've been completed in one bizarre freakshow sitting. Read it once, twice, three times a lady.

Please don't take my word for it. The internet is full of hot takes of this book. Gabino Iglesias once wrote a way better review and it can be found here.

It's the reason I picked up my copy in the first place. You can pick yours up here.

About the Author:
Cody Goodfellow studied Literature at UCLA. He was a contributing editor for Substance Digizine, and an undistinguished composer of scores for pornographic videos. He worked as a radio research musicologist, and performed electronic music under the monikers Deprogrammer and Worker & Parasite.