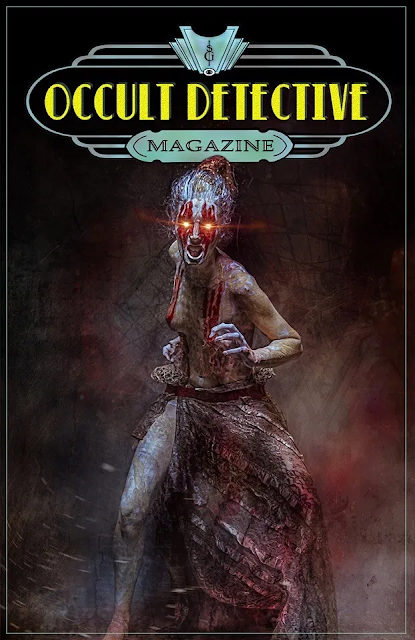 Occult Detective Magazine #6, Edited by John Linwood Grant and Dave Brzeski, published by Cathaven Press December 2019, 205 pages.
Occult Detective Magazine, formerly Occult Detective Quarterly, publishes fiction and non-fiction related to, well, the occult detective. Think John Constantine or Jules de Grandin or even Batman at times, investigating strange goings on that have no earthly explanation. ODQ offers up a decent mix of stories, though I will confess that I was surprised by the number of vampires present (and equally happy with the decided lack of zombies). That said, on to the stories:
“The Rending Veil” by Melanie Atherton Allen: Two members of a particular club are called out into the English countryside to deal with some troublesome ghosts. The ghosts themselves aren’t quite the problem, but when two of them overlap, it weakens the boundaries, and then an old forgotten God can make its way through. While I enjoyed the overall setup of the story, it felt like a much smaller piece of a whole. As well, the somewhat stodgy characters of Pendleton and Anderson didn’t engage me as much as I might have cared for as I found the character of Wake more intriguing.

“Komolafe” by Tade Thompson: is a tale told via poem, about a man and a temptress who may or may not be human and the man’s dead friend. I would have enjoyed a bit more to this, as the lines are extremely short and the tale itself abbreviated. I wouldn’t mind seeing someone take a crack at it and delving into the world of it a bit more. That said it was effective in telling the story it set out to tell.

“The Way of All Flesh” by Matthew Willis: A young woman’s lover is dead… only the locals believe he has become a vampire, a curse put on the village because of the affair the woman and the dead man were carrying on. Another priest from outside is called in to deal with the matter as he has more experience dealing with such matters. The story plays with the idea of supernatural vs mundane explanations rather nicely, though the twist at the end wasn’t a complete surprise.

“Blindsider” by Cliff Briggs does a nice job brining Appalachian backwoods folk lore in with a bit of cosmic horror. Horace Cole is a bit of a hermit, but when things go supernaturally wrong, he’s the man the locals go to and that’s exactly the kind of trouble Vergil Campbell has. He managed to attract a Blindsider, a type of cosmic parasite that feeds off a single person and does its best to make sure that it’s victims are isolated, usually by driving off or killing anyone its victim might be close to. Unfortunately, there’s only one real way to deal with a Blindsider and that’s to make it’s victim appear dead. This a story where the curse is almost as bas as the disease, but I applaud the writer for not going with what might have been a more traditional resolution.

“Vinnie de Soth and the Phantom Skeptic” by I.A Watson revolves around the dilemma a psychic has trying to convince a recently departed skeptic and debunker that he’s a ghost and the reason why he’s a ghost is because someone placed a curse on him- two things the recently deceased steadfastly refused to believe in. The overall setup almost reads like a one act play, with all of the real action confined to a limited location and all of the characters clearly defined. In this case, it works well, even if I did find the ending wrapped up a bit too neatly.

“The Empanatrix of Room 223” by Kelly M. Hudson I found one of the more creative pieces in the magazine. August Marks is a private detective currently engaged by Hell to find the mother of the Antichrist. As a result, he has his very own personal guardian demon. Mr. Marks isn’t a stupid person, however, so he takes on side gigs as well, knowing that he’s got Hell’s own bruiser on his side. This case involves August tracking down a woman, but it quickly goes in directions he didn’t fully anticipate. I thoroughly enjoyed the worldbuilding and level of detail that went into this piece… plus I’ll admit I have a soft spot for main characters that aren’t on the side of the angels.

“The Unsummoning of Urb Tc’Leth” by Bryce Beattie is a different kind of urban fantasy tale. Here, our intrepid meddler is investigating what looks to be a mild case of demon summoning, but quickly turns out to be something much, much worse. The story was definitely lighter in tone than some of the other pieces included in the collection, and at least some of that was due to how the story was filtered through the main character… a person who’s superpower is that he doesn’t get afraid. Normally, you would think such a trait would lead to an early death when you should be running away from the bad guy instead of into its maw, but it works here, for the most part. I wouldn’t have minded seeing the side characters developed a bit more, but I also acknowledge there is only so much you can do in the short story format.

“In Perpetuity” by Alexis Ames highlights that writers can blend the occult detective genre in with others, in this case science-fiction. An investigator is called to a space station where an accident has recently occurred, resulting in a demon entering our reality. The space station, as a matter of course, is crewed by not only humans, but vampires and werewolves as well. What follows is the investigator trying to narrow down the current host of the demon, without getting killed himself. I found stacking the different styles to be a bit much, and I don’t recall if there was much of an explanation as to how the government came to be working with supernatural creatures. The main character is memorable, and while he does possess some talent, he is mundane enough to ground the story to give the reader a way to connect with the rest of what is going on.

“The Way Things Were” by S.L. Edwards follows to men, Joe and Johann who are steeped in the occult and who work to keep it secret from the unknowing masses. This particular instance involves them facing off against The Great Savini and his assistant, two practitioners masquerading as common stage magicians. Over the course of the tale, I felt like I had seen this story, or one like it before as I was reminded (favorably) of Clive Barker’s “Lord of Illusions” which had a similar premise. The magic is more overstated in this piece, and there’s an inkling that the world powers are in an occult arms race, a facet that is driven home by the end of the story. I enjoyed it, but also found myself more sympathetic to the antagonists in this piece, more so than in any other story in the collection.

“Angelus” by John Paul Fitch is an over the top bit of urban fantasy, complete with angels, Enochian magic, a snarky ghost sidekick and a magical homeless man. While the story isn’t quite apocalyptic, it does come across as apocalyptic-lite, but well done even so. A current of humor (dry) runs through the piece, and you can’t help but feel for the main character, Anna, as she tries to balance a love life with all of the otherworldly happenings that, well, keep happening to her.

“The Last Performance of Victoria Mirabelli” by Ian Hunter is another vampire tale, this one about the main character’s attempt to acquire a new domicile, a cabinet rumored to be haunted. Only the rumors turn out to be all too true, as the late owner’s spirit still possesses the object, along with the spirits she had trapped over the years. What follows is a battle of undead vs undead, and an ending that sent a chill down my spine.

Finally, we have “Occult Legion: He is the Gate” by James A. Moore and Charles Rutledge. I’ll admit I was skeptical going into this story, as it is the sixth part of a six-part story. Only, this stands well on its own as a PC in Scotland investigates a missing castle. She is quickly sucked in to events beyond her control as things outside of our world us the castle to bridge the gap between us and them. There is quite a bit more action in this piece than in some of the other stories, and I found myself fully engaged in the story even if I did feel I was missing some pieces (filled in, presumably if I had read the other five parts.

Filling out the magazine is an interview with Jonathan Raab, as well as a number of reviews of works that fall within the occult detective genre which makes for a nice bonus on top of the excellent fiction.
ODQ #6 is available through amazon https://www.amazon.com/Occult-Detective-Magazine-Linwood-Grant/dp/1916021212/and you can also check out their main page at http://greydogtales.com/blog/occult-detective-magazine/if you want to sample their madness first.

About the reviewer:
MATTHEW X. GOMEZ maintains his web presence at mxgomez.wordpress.com as well as on twitter @mxgomez78. In addition to writing, he is one of the two conspirators running BROADSWORDS & BLASTERS, a new pulp magazine that debuted in 2017. Other work of his has appeared in PULP MODERN, STORYHACK, SWITCHBLADE, and in the anthologies MIDNIGHT ABYSS and ALTERED STATES II.
Book Reviews Cathaven Press Dave Brzeski Econoclash Review John Linwood Grant Occult Detective Magazine
Share. Twitter Facebook Pinterest LinkedIn Tumblr Email