ECR reviews Max Sheridan’s 2018 novel, DILLO, published by Shotgun Honey. 230 pages. Max Sheridan’s book is destined to become one of those rediscovered treasures, like Moby Dick or Brave New World. One of those literary things that strangely becomes mandatory cool–before growing from cult jewel into a dreaded tome for dissection by grandchildren in school. Until that terrible future arrives, and you are forced to understand the metaphors until they lose their power, you should buy a ticket and take this ride, IMMEDIATELY. The fact that this book continues to go overlooked by the reading public is not only a travesty, it should be a crime. 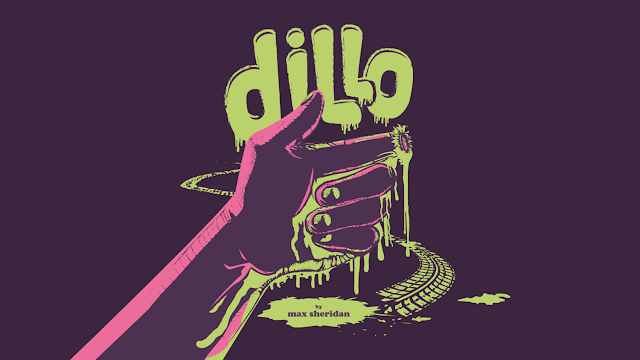 Cover Design by ROCK the DOG

It took me a few tries to fully understand this book’s rhythm…but once I relaxed and let it take me where it wanted to go–I couldn’t put it down and I was thankful for the ride.
Max Sheridan’s Dillo is a phantasmagoria of quickly paced prose. There’s rarely a word wasted in this quirky pulp travelogue. The pages almost turn themselves as scene builds on scene and a murderer’s row of memorable characters crawl across the page. Each richly described with an economy of detail.

As far as plot goes…it involves a weirdo father/son relationship and a 2,000 mile trek across the country. Revelations surface like pimples on an unwashed face–some more powerful than others leaving acne scars on the soul. Like a Huckleberry Finn for the 21st century. Unbound by social mores traveling along with its own internal logic at high speed. Each new introduction creates more trouble for our duo until confronted with the weirdest of the weird.
Early on our hero says:
“Then something else came stirring out of the glare. It was a living girl. She was slapping down the road on heelless sandals the color of the dividing line, regular as a mule. There wasn’t much traffic on Highway 290 that I could see, but you could tell she’d been offered rides going in both directions on account of the fact that she went around with bare arms and legs and those legs just about touched the heavens.”
This is a masterpiece of the American Idiom and should be thoroughly read by all.
This review original appeared on Amazon, March 2019.

*CHEAP THRILL ALERT: if you search Amazon for Dillo but don’t add the author’s name, there’s a chance you’ll be shown other items that sound a lot like the book’s title, Dillo and would be considered NSFW. Brothers and sisters ECR does not want you to become unemployed nor do we pass judgement if you purchase a NSFW sound-a-like item as well as the book by Max Sheridan. We pride ourselves in providing the world Quality Cheap Thrills.