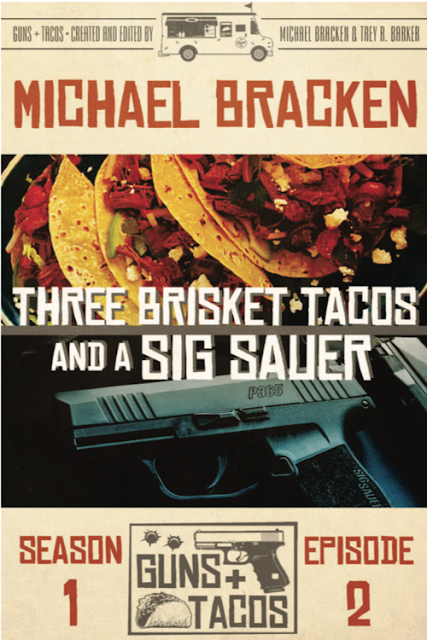 ECR reviews “Three Brisket Tacos and a Sig Sauer” by Michael Bracken. The second episode of six and a half from the Guns + Tacos novella series from Down & Out Books, 2019. As crime writers go, most want to pen something that is so enjoyably evil that reader’s can’t wait to strip down to pajamas and turn pages. As crime stories go, most of them hit the genre highlights while wallowing in the clichés until every new work resembles the wax statue that came pre-molded. It’s rare that something so familiar feels so original and effortless, and yet that is exactly the experience of reading the 2019 novella series from Down And Out Books, GUNS + TACOS.
All good boys love their mommas–only those who are truly special love their Aunts more. This slanted theme runs throughout this twisted tale of ding-dongs, armed robbery, and criminal grooming. Michael Bracken’s Three Brisket Tacos and a Sig Sauer is an excellent second episode of GUNS+TACOS. A series created by Mr. Bracken and Trey Barker, consisting of six novellas all involving a taco truck that doubles as an illegal armory.
The second episode explores the ever-entangling relationship between fresh out of prison, Joey and Sylvia, his aunt by marriage. In this dark noir, the stripper/Svengali Sylvia uses everything in her power to groom the young Joey and exert total domination over his life and deeds. For his part, Joey loses himself to her total control, by engaging in more and more dangerous acts of criminality until he pulls one job too many.
After getting arrested and being introduced to the terrible joys of prison sex, Joey becomes even more lost under his Aunt’s evil spell. And when he finally gets released, Joey has no where to go but back to his Aunt’s which is just how she’d planned it.
When threatened by her nephew’s budding relationship with a pretty neighbor, Gloria, Sylvia spins her ultimate thrill-kill plan: rob four banks in one day.
Mr. Bracken deftly unspools the second episode of GUNS+TACOS and it hooks you from the first page. You keep rooting for Joey to turn things around all the way up to the harrowing climax. This tale, as well as the series in general, stands on the shoulders of James M. Cain and George V. Higgins, allowing readers a further and deeper view into the abyss. I highly recommend GUNS+TACOS for any fan of modern crime fiction.
Book Review Econoclash Review Michael Bracken
Share. Twitter Facebook Pinterest LinkedIn Tumblr Email