Currently, I have just returned from a doc in the box, where I paid $25 to have a medical professional write me a script for Tamiflu and most importantly a note for work. I get three days. No more, no less.  So I thought ECR could explore the wonderful world of disease/sickness in storytelling. So heat up some Chicken Noodle Soup, make yourself a HOT TOTTY, and we’ll see if this virus spreads.
Body Horror as a whole has three elements: Invasion, Transition, and Normalization. Invasion or infection causes the character (as well as the audience) to be introduced to whatever is gonna be crawling around inside them. Transition, whatever inside now manifests itself through physical effects on the character’s body. There is an increase in symptoms. Both internal and social conflicts escalate towards an emotionally or disgustingly satisfying climax. Finally, Normalization, the character either dies or spreads the body horror to the masses. If the character dies, things return to normal. However, the scarier ending involves the spread—thus normalization happens by creating “the new normal.”
Body Horror as a genre has a king. All hail Cronenberg. David Cronenberg’s obsessed with the relationships between sex and death. Like if Woody Allen was a Canadian stoic instead of a New York nebbish. Thanks to the animated show, Rick, and Morty, Cronenberg’s disgusting biological creations have been introduced to new generations. That can only be a good thing.
David Cronenberg built his entire career exploiting our fears of ourselves and driving really, really REALLY Fast. Parasites that create sex zombies, aside, someone smarter than myself once said, “Anyone reckoning on dying, had better come to terms with the films of David Cronenberg.”
Body horror is the most realistic of all the horror genres. If you want to be upset…Just google image search for Parasite. Those images alone could give a med student nightmares. People contend with such invasions on the daily and it is a tough life to transition through. 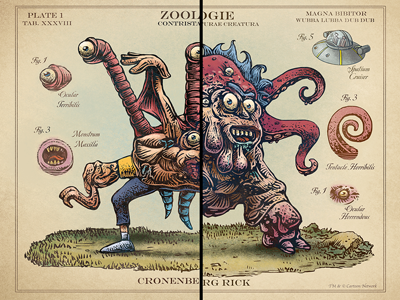 THE FLY
Jeff Goldblum sets the tone immediately, “What am I working on?  Uh…I’m working on something that’ll change the world and human life as we know it.”
A very well written script based only loosely on the short story source material. Goldblum plays a scientist, Seth Brundle, who suffers from motion sickness. So, he creates a new way to travel,  Teleportation by way of the telephone. Which is actually twin Ducati motorcycle engines upside down. Enter Brundle’s love interest (and at the time-real life Goldblum gf) Geena Davis, who plays science journalist named Veronica. Their courtship is a mutually exclusive arrangement involving a book about scientific research and scratching that itch. However, this courtship becomes the key to the entire enterprise as their relationship blossoms then wilts, due to Brundle’s scientific endeavors.
Like a lot of great scientist before him, Brundle doses himself and the ticking clock of disease is set in motion. SPOILER ALERT FOR A MOVIE ALMOST THIRTY YEARS OLD. Brundle teleports himself and unwittingly brings along a fly as a hitchhiker. The teleporter blends their DNA and badda bing badda boom, we enter the transition phase of the story. The Fly mirrors such life-threatening diseases as cancer, and the effects on loved ones. Veronica’s attempts to help the deteriorating Brundle are noble in their intent but deliver nothing except shared suffering. She desperately wants to help him. But she finds it difficult to relate once he begins climbing the walls and vomiting on his food.
Like watching a mother, grandmother, sister, daughter, son, lover, succumbing to a disease…audiences are helpless to change the course of the plot. We can only offer our loved ones, strength and compassion. In the most distressing of these cases, those two items will be needed for the caregivers as well.
Cronenberg is such a master storyteller, that one hardly notices the story’s shifting POV, from that of Brundle to Veronica. Dreams of birthing Butterfly babies and pulling your own fingernails out, aside, The Fly is a visceral film bound and determined to ruin your weekend. But it also offers us a safe look into the abyss. What will we do, if-when, we ourselves are Veronica, or worse…what if we are Brundle.
When Brundlefly attempts to readjust his DNA so he can turn back into Brundle, the resulting Rick and Morty Cronenberg monster beg to be killed. Thus putting the audience squarely in Veronica’s shoes. Do we pull the trigger? These are the questions Cronenberg forces our subconsciousness to ask. And that is why his work is so terrifying.
FUN FACT: The film was produced by Mel Brooks’s company Brooks film. 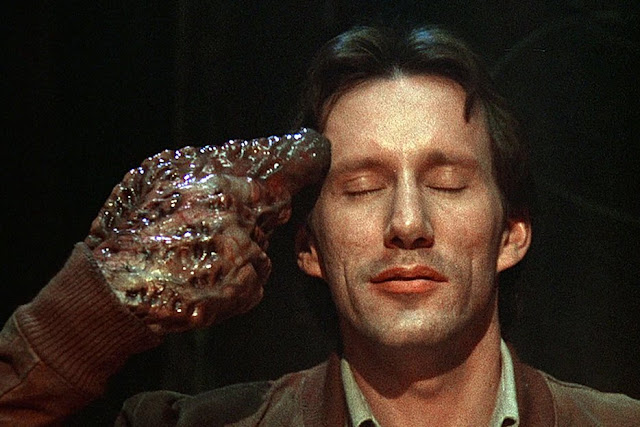 VIDEODROME
Cronenberg’s prophetic masterpiece, Videodrome, is a nasty little piece of film. Although it can be argued that it is more of a techno-surrealist film than a body horror. I believe it still fits the BH tropes, as long as you consider addiction to be a form of the disease.
It stars James Woods as Max. A cable channel CEO who becomes obsessed with a cryptic and demented torture show called, Videodrome. Blondie’s Debbie Harry stars as his equally obsessed girlfriend, Nicki Brand.
The plot is set in motion when the pain hungry Nicki seeks out the Videodrome show to “audition.” Max knows this is a bad idea and Nicki soon disappears, igniting Max’s quest to find her and Videodrome’s home.
The disease in this film is an addiction to technology. Or more accurately an interactive form of technology and the evil behind it.  Cronenberg throws lots of things at the audience: S&M, masturbation, self-mutilation, religion and of course a flesh gun hand thing: “Welcome to the new flesh!”
Lot’s of folks have compared Videodrome with the pull of online pornography. I won’t dispute that tract of thinking here, but I would like to add that Cronenberg goes further with his thesis. As Max becomes more obsessed with Videodrome, he begins to hallucinate. This unhealthy fixation with the show, causes his body to transition. After making out with a bulbous television, He develops a vaginal like opening in his stomach. A place for him to connect easily with the cathode ray and insert a Betamax. Like a parasite, Max can take his Videodrome with him everywhere. Just like people now, who illegally drive with their eyes on their phones instead of the road. The disease has become a distraction that operates in the physical world. Yep. 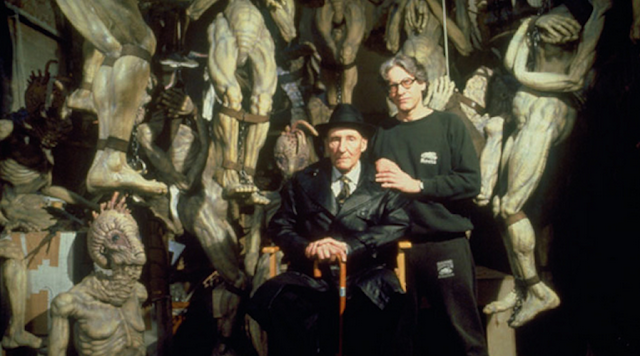 NAKED LUNCH
Cronenberg filmed the unfilmable William S. Burroughs novel, Naked Lunch.
He combines the novel with vignettes from Burroughs’s life to create a hallucinatory adventure story with ravenous insects, drug abuse, and talking assholes.
This movie defies description. But jazzy currents of heroin addiction meets spy novel excess somewhere in Morrocco, comes pretty close. This thing has got to be seen to be believed.
THE BROOD
Woman (Samantha Eggers) under the care of a Mad scientist psychiatrist (Oliver Reed) begins to give birth to a litter of clones. These clones go out into the world and kill.
It’s an unsettling ride from the first frame as his longtime collaborator, Howard Shore’s score, rattles the audience with a minor chord massacre.
SPOILER ALERT: The birthing scene at the end and the former patient with the goiter are worth the price of admission. If you’re into that kind of twisted shit.
SCANNERS
Last but not least on this greatest hits list for the sheer Phillip K Dickness of the premise. A race of Scanners, people with extraordinary mental power are being hunted and killed by a government agency, or are they?
The scene near the beginning, with the Scanner showdown, isn’t even close to being this movie’s money shot. But the reverse bukkake of blood that erupts after Michael Ironsides wins is something that ECR considers “Must See!” 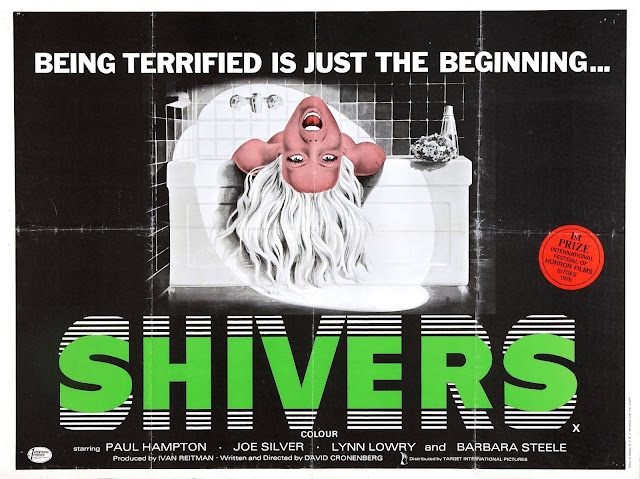 Most of Cronenberg’s movies are pulling your fingernails out disturbing. He originally got his degree in Literature. The man has stated that the three movies that upset him the most when he was growing up were Walt Disney’s Bambi, Walt Disney’s Dumbo, and Blue Lagoon. All three deal with children getting separated from their parents. Separation is another key to Body Horror. The terror associated with separation.
Body Horror is not the same as Epidemic Horror or Plague Horror. Those stories involve a lot of the same tropes, however, EH looks at the big picture and concerns itself with the effects of normalization. How to deal with the containing the spread. It has served potboilers and popcorn fodder alike. Richard Preston’s The Hot Zone (Outbreak), Stephen King’s The Stand, George Romero’s Night of the Living Dead/Dawn of the Dead/Day of the Dead, Michael Crichton’s Andromeda Strain, Vandermeer’s Annihilation trilogy, or any of Stephanie Meyer’s Twilight series, (which is in itself a form of widespread sickness.)
If you’ve made it here dear Thrill Seekers, God bless your black heart! I’m already feeling better because of it.

I hope the flu runs it’s course soon, because we’ve got a lot of work to finish for our release. As of right now ECR Issue One will be coming out at the end of February. If not it will definitely be here before April 1st.
Share. Twitter Facebook Pinterest LinkedIn Tumblr Email