The DIY Declaration of War

Christmas Eve 2017 will go down in history. Not because Aunt Nancy and Grandma locked horns again—kicking one another out of their respective homes—forever. Nope, that holiday ritual has been performed like clockwork for over thirty years, and we all know it’s determined to continue until one of them two biddies cooks in that big kitchen in the sky.
Nor did the historical nature of “Santa Watch 2017” have anything to do with the outright plunder of the dimwitted American people by their American Lizard Overlords. Although parallels can be drawn. However, any attempt to do so will draw you into paranoid conspiracy theories that drank vodka for breakfast, ready to deploy their army of misinformation bots—and comrades, nobody’s got time for that!
History was made on December 24th, 2017 just like history was made, well before the world became the hype machine we are all trapped inside. In other words, a big splash happened and nobody noticed…YET.

To say the publishing of the second issue of the second volume of an indie journal is history-making, sounds ludicrous. In fact, as I write this now, and read it softly to the empty kitchen, I wonder if my own faculties are secure enough to make such a claim. Well, I’m the quirky publisher of Quality Cheap Thrills…so hear me out.
In the introduction to the new issue, Editor Alec Cizak throws down the gauntlet against artistic tyranny stating, “We are at WAR. We are at war with the mundane, with the ordinary. We are at war with international corporations attempting to control the zeitgeist!”
This simple notion envokes a necessarily timely holiday message. Needed to awaken America from the PTSD haze of the previous three weeks before Xmas 2017.
These are dark times indeed.
Unelected Bureaucrats can overturn Presidential orders and end the internet’s neutrality and netality. Elected fat cats can cut everyone’s taxes and then foreshadow cutting entitlement programs for the less fortunate. The Walt Disney Company announced plans to purchase 21st Century Fox, thus completing their desire for world domination, giving all those nuthouse Napoleon’s wet dreams. Thank the maker, Pulp Modern exists and—has produced one of the best indie zines, I, for one have ever seen.

How did they manage such an accomplishment without a fat pub contract from the Big Five?
Mr. Cizak states the key is his partner in crime, Richard Krauss, who is responsible for the amazing design. From the cover art, a “Turner Classic” colorization of a crime scene photograph, to the interior story spreads. This entire anthology looks slicker than a hospital blood spill. Which makes the authors of the pages and between the artwork read amazing as well. Which stays true to what my Grandmother used to say, “If you’re gonna invite people over for dinner then you have to set a good table.”
My Grandmother also said things like, “Baby will you put the lotion on my aching corns?” Which also applies, in this case…to an extent. Even though the indie author’s inside PM V2.N2. deliver the goods, AC and RK could’ve just as easily published outdated VCR instructions and I believe people would’ve turned to the next page to find out how it ends. I know I would’ve.
THANKFULLY they had no such notions. The pulp fiction inside is heavy on the crime, but that is by no means a negative. All the stories flow together nicely. And although I never wish to favor a few published author’s over others, the standouts to ECR were Jim Thomsen’s BLACK LAB, Preston Lang’s ELEVEN IRRITATED PEOPLE, and J. Robert Kane’s GODHEAD. Robert Petyo’s SACRIFICE was also well written, and we can’t wait for the world to read his ECR story in our issue 2, coming late 2018. But I digress. This article is not about the individual achievements of the published authors. I will be completing an AMAZON review in the next couple of days to fulfil my goal of responding to books I’ve purchased online. No, this article is all about the singular achievement of the publishers Cizak and Krauss.

AC sets the tone of PM2.2 with the eloquence of his RANT, opining about the current state of the indie publishing industry. Industry? Ha! It’s a world…if anything it’s a third world or even a fourth. And I do hope, dear Thrill Seeker, you’ll forgive my misspeaking. He relates a heart-wrenching story about the futility of trying to do this for a living. How B&N refuses to stock PM or anything else by us mudpeople. He details the condescension he’s experienced when dealing with them and other authors. He relates how a featured author at an event, is introduced to his Journal and immediately turns to the last page.
What was she looking for Dear Thrill Seekers? The ubiquitous Print-on-Demand stamp. Ah, AC relates how insulted the featured author was being presented with such material. I believe AC calls it giving her a "fresh turd to smell." That person is foolish! And so is anyone else who looks down their noses at a viable marketplace. Especially one as classy as the new Pulp Modern. The big five cannot produce something as alive as it, or Switchblade Magazine, or Betty Fedora, or anything in the Down and Out Books pseudo-family. They just can’t. They’re too afraid of the bottom line. It’s true…They are too big to fail and that is why independent publishers are important.
There are over 10,000 independent journals fighting for your time. Most of them will get their POD tramp stamp, out of pure necessity. Don’t you dare hold it against them or anyone keeping up the good fight!

The Print-on-Demand stamp is a goddamn badge of honor. It says to the world I may not be making enough money off this product to keep it alive, but no one is controlling me. No one has a hand over my mouth. I am nobody’s kept trade, keeping the house clean for Mister or Missus Moneybags to come home with my small allowance of Scroogebait. The POD stamp says we are leading the fight for the betterment of mankind. Leading the fight for the soul of the human being. Fighting the good fight for your eyeballs with content that isn’t judged by committee, or censored, or watered down. The POD badge of courage is birthing the legends of the future. Bukowski, Thompson, Willeford, Dick, Jackson, Burroughs, Ginsberg, Kerouac, Welty, and any other literary missing link who crawled out of the muck into our collective consciousness on legs given to them by the independent publishers. Of course, those famous names would go on to stand on their own.
Thanks to the new Pulp Modern, and it’s breathtaking visual and narrative accomplishments—a line in the sand has been drawn. Which side are you on?
Grandma’s or Aunt Nancy’s?
The ISP’s or your neighbor’s?
The Big Five or the Indie’s?


Dear Thrill Seekers, help ECR truly make America Great Again by supporting independent publishers like Pulp Modern. These publishers and editors are not spending their time to create these magazines and journals for something as common as money. No they, like you and like ECR, want something much, much more. 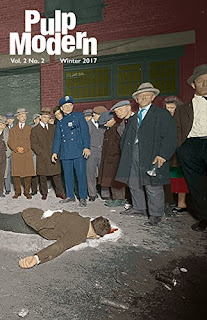 Purchase your copy of Pulp Modern