***DISCLAIMER***
All Thrill Seekers, currently under legal drinking age or in Recovery for Alcohol Abuse…
DO NOT TRY THIS AT HOME!

A recent trend on social media, tells you to start “X” movie at “X” time on December 31st. Doing so will cause a character to say their catchphrase directly as the clock strikes midnight, thus ringing in the new year. BORING!

BEYOND THE VALLEY OF THE DRINKING GAME

3. A friend or two, so you’re not laughing your ass off alone!

The GAME RULES are SIMPLE:
1. Open your favorite Libation.
2. Start the movie.
3. Every time you see TITS or ASS, take a drink.

Due to the Machine Gun Rapidity of the editing, this game is incredibly hard! You’ll be laughing so hard at the Groovy ridiculousness on the screen that you’ll miss a few frames of T &A and at least one of the ten actor blinks. That’s right Thrill Seekers! A movie where every one is undergoing the Ludovico treatment from A CLOCKWORK ORANGE…but with more boobs and less classical music. 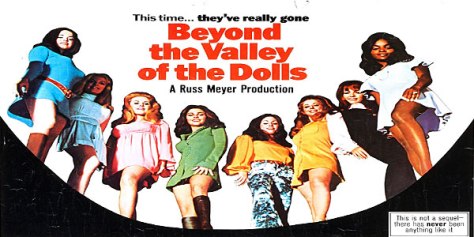 You can purchase your copy of Beyond the Valley of the Dolls at Amazon.com as well as on iTunes. However you may want to hurry since the Walt Disney Company has plans on taking over Fox and who knows, maybe they’ll bury BTVOTD in the vault along with SONG OF THE SOUTH and THE STAR WARS HOLIDAY SPECIAL.

ECR hopes you enjoy one of our favorite Holiday Cheer Alternatives.

In 1970 a film was released by a Major Hollywood Studio directed by the most famous smut peddler of the previous decade, Russell Albion Meyer, or Russ Meyer or just RM.

RM was a World War II vet, stationed with the Photography unit. That’s right. This lunatic stormed the beaches of Normandy armed with a movie camera instead of a rifle. He and the rest of his platoon of crazy SOB’s would find the best place to shoot the carnage of war. And shoot it they did! Cameras blazing as machine guns emptied their magazines and bombs burst overhead. In fact, 80% of the best footage of WWII was shot by Russell Albion Meyer and his platoon. RM was known as quite the stickler for perfection when it came to his footage. His images are known for their clarity and deep focus. A style he would utilize for the rest of his career once he started blazing his cameras at different sets of bombs and piecing them together faster than you could flip through a magazine with a rapid-fire machine gun speed.

And so it goes, that RM met the one and only, Ernest Hemingway, at a bar in a bombed out French town. The middle-aged journalist hit it off with the young camera grunt and one thing led to another. Once, Hemingway learned that RM was still a virgin,  he took the young man to the nearest bordello and told him to take his pick. The story goes that RM picks the lady with the biggest bazookas and never looked back.

Once the war was over, RM moved home to California where he would frequent the local strip clubs. Ingratiating himself with the talent, so that he could take pictures of them later. RM would then go on to sell the pictures to a little-known publication called, Playboy. Several images taken by RM would grace Hugh Hefner’s pages, especially ones of RM had taken of his wife, Eve Meyer. Eve was a well-known dancer in the burlesque circuit and after teaming with RM would go on to make millions.

Together they formed Eve Productions. They set about shooting a motion picture. One for the Trench Coat brigades that frequented the burlesque houses. A thing called a nudie-cutie. Before RM, a nudie-cutie was a film that showed T&A. Due to the Puritan Obscenity laws of the 20th Century, the only way they could show Granny’s mammies was to set the film at a Nudist Camp or in the case of such shock and awe pictures like MOM AND DAD, say they were educational. However, once Obscenity laws were changed in the late 1950’s, the floodgates opened. Leading the charge, Mr. & Mrs. Meyer in their film “THE IMMORAL MR. TEAS.”

The movie, just like all Nudie-Cuties, is just an excuse to film women taking their clothes off. Except,   this movie was shot by RM. Which means that it contains not only nekkid ladies but also a clear picture with a deep focus. Their follow-up, 1961’s “EVE & THE HANDYMAN,” looked like it was made by a Hollywood studio, and raked in the trench coat crowd’s corn. That Christmas, RM and Eve bought matching Porsche 356’s. Lesser titles would follow, but they all delivered the goods and made the Meyer’s enough money they could live comfortably. If RM, had been capable of enjoying such a successful slice of life, then the world would’ve been a different place indeed. There would’ve been no development of the Russ Meyer Amazonian woman.

RM was obsessed with breasts and didn’t care who knew it.

After, Eve and Russ had a falling out, RM struck out to make narrative films. A string of cheaply made black & white films followed. Replacing the nudity with outrageous violence. The women in the films were unlike anything seen before. Being endowed with enormous assets and spouting the coolest/strangest dialogue the silver screen had ever heard. LORNA, MUDHONEY, MOTOR PSYCHO all came before the masterpiece that is Russ Meyer’s “FASTER, PUSSYCAT! KILL! KILL!”

PUSSYCAT deserves it’s own article here at ECR but for now we shall just say that RM’s ability to tap the zeitgeist is no better on display than in FASTER, PUSSYCAT! KILL! KILL! A bizarre movie about a trio of hot rodding Go-Go Dancers with a violent streak, who set out to get their kicks in the Death Valley desert. Its influence can be felt across genres of popular culture. Although they didn’t deliver the dollars like RM was used to, so it wasn’t long before he went back to filming his topless shenanigans.

RM would never again shoot something in black and white. Nor would he release something without nipples. And the next thing RM knew, he was being written up in the Hollywood Reporter and the Wall Street Journal. RM was being hailed as the King of the Nudie Movie. All hail King Leer!

Then the unthinkable happened. A legitimate Hollywood studio came calling. RM laughed all the way to the bank after he signed a three-picture deal. The first movie on the docket? A sequel to the highly successful VALLEY OF THE DOLLS. 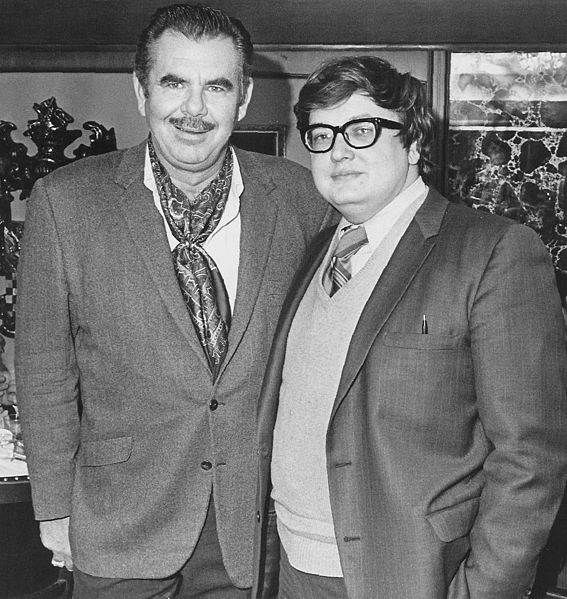 RM recruited a Midwestern film critic, Roger Ebert, to write the screenplay. Ebert got the job because, like Meyer, he had breast fetish and had recently given RM’s movies a glowing review in the Chicago Sun or Tribune or who gives a fuck, this ain’t about the fat film critic.

The movie, BEYOND THE VALLEY OF THE DOLLS, is the result of their strange pairing. It is a poison pill of a movie about Hollywood excess. Would you expect King Leer to deliver anything else?

A trio of doe-eyed faces forms an unbelievable rock band and heads to the West Coast. There they immediately get sucked into the wildlife. They get signed by crazy Phil Specter-ish record producer, Z-Man, who is actually Z-Woman…or Superwoman…or who gives a fuck, take a drink and go with it.

Erica Gavin, RM’s star from VIXEN, is terribly underused in BTVOTD. Portraying the twisted mother figure. Spoiler Alert: She starts the movie with pistol being put in her mouth. Obviously there was some undisclosed hard feelings about the actress.

RM would meet his future wife and evil muse, Edy Williams, during the shooting of this film. She plays the other side of Z-Man’s coin. A female version of the predatory celebrity. 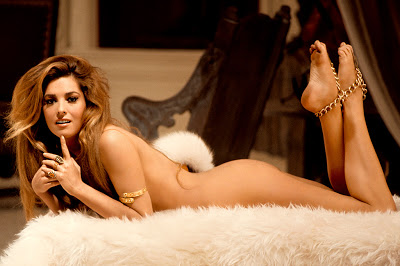 20th Century Fox would go on to drop the ball on RM Hollywood career. He’d soon see the executives fired and his own parking spot on the lot being painted over. The days looked dark indeed.

RM would rebound in the seventies with SUPERVIXENS, UP! and BEYOND THE VALLEY OF THE ULTRAVIXENS. But afterwards would find his unique blend of boobs, comedy and clear deep focus photography no longer viable. The VCR had appeared and driven the trench coat brigade indoors. Grainy videotaped images of hardcore sex were in and King Leer was out.

BTVOTD is a tour de force of manic obsession. When compared to the rest of RM’s canon, the only other movies that come close to this singular vision are FASTER, PUSSYCAT! KILL! KILL! and SUPERVIXENS.

RUSS MEYER’s storytelling visions would never again have the dream factory distribution, but he didn’t need it. RM was his own distribution. If you called the Russ Meyer Productions phone number, RM himself would answer and take your order. Because of this, RM’s films were sold at a premium just like all the other smut. However, unlike that depravity, the films of RM offer the world something much, much, MUCH More.

If you’d like to learn more about the life and times of RUSS MEYER you can check out his autobiography, A CLEAN BREAST. But due to the price, it may be unaffordable.

ECR also recommends his biography, “BIG BOSOMS & SQUARE JAWS,” by Jimmy McDonough. ECR purchased their copy at a Half-Priced Bookstore but you can buy yours at Amazon.com.

Enjoy your New Year’s Eve and be thankful that 2017 is over! 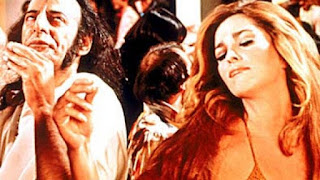